skip to main | skip to sidebar

I'm so happy for our country. I feel we have a capable, clear-headed, and consensus-building president elect. Three cheers for President Elect Obama and for all of us.

Also, the Beavercreek School bond, which I helped stump for, passed. It was its third time out, and a lot of people felt it was doomed with the recent economic downturn. But, the grassroots effort we put out seems to have made the difference. Three cheers for the citizens of Beavercreek, Ohio.

Another milestone: my sister Kindermusik educators are convening right now, in North Carolina. I'm thinking of you, ladies. Oh, I wish so much I were there. It's the right thing for me right now that I'm not there, as I'm not teaching Kindermusik right now. Sometimes, I'll be floating around the house and I'll start singing "Ram Sam Sam" or any other of a million little Kindermusik tunes in my head, and I'll miss teaching Kindermusik so much, it makes my teeth ache. But I'm working on the Nurturing Parenting teaching right now, which is off to a VERY SLOW START which is part of what makes this hard. I truly hope to be back in the saddle and at the KM convention in 2009.

Another milestone: I just passed my one year anniversary of keeping this blog! Wow. Coming upon my one year anniversary is forcing me to pause and reconsider. It started as a Kindermusik business tool. Then it morphed into a craft/Hall family happenings/random thoughts blog. That format would make sense if my family read it, or a wide circle of friends. But the truth is that there are three people who come by regularly to check in with me (bless you, friends), and two more who stop by once in a blue moon. I'd be more efficient, possibly, if I just e-mailed those dear friends. So, I'm rethinking the blog, and it's going on hiatus. I hope it will be back again soon, in a more professional context, perhaps. Or? I don't know yet. I'm wondering if I stop blogging, if I'll be nudged into working on the writing projects that hover on the edges of my consciousness.

It's not so much the long journey...

...that wears you down, but it's the pebble in your shoe.

I used to have a friend who had this saying framed. Today is definitely a pebble in my shoe kind of day, and thinking of this forlorn little quote seemed to help a little.

What quotes do you think of on rough days? I don't mean so much the "buck up, little camper! Tomorrow will be brighter!" kind of quotes. I mean the kind that quietly sympathize with your state of mind. Quotes that speak to the human condition.
Posted by Launa Hall at 10:32 AM 2 comments:

Here in the battleground state 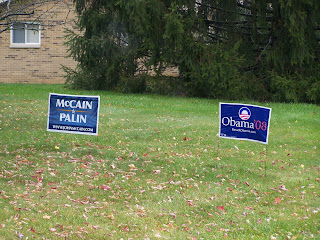 Yep, we're in a battleground state here in Ohio. I took this photo of a neighbor's yard. Talk about battling.
When my mother was here visiting, she commented that she'd never seen so many political signs, and I believe her--where she lives, in Washington state, the electoral votes pretty clearly go blue, so Washington citizens don't put so much energy into convincing each other.
But I live in a battleground state this year, and I decided to jump into the fray. Yesterday, with a group of folks from the Obama Campaign for Change Office in Beavercreek, we went knocking doors. The office provided us with lists of addresses where, they somehow determined, undecided voters lived. We attempted to cheerfully, politely, and respectfully persuade. We said why we were voting for Senator Obama and gave out flyers. People were very nice. I think they are very used to this sort of thing in Ohio. I wish there was a different way, a less obtrusive way (hi, I know you're enjoying a precious Saturday at home with your family, but I wonder if you'd like to talk politics for a few minutes...I didn't actually say that, but that's how it felt...) , but this is the time-honored way of increasing your candidate's polls. It was hard work, but I'm glad I did it. It was a pleasure to be among like-minded citizens in Beavercreek. It was also a pleasure to see who showed up--I suspected that I might be the oldest, for example, but I'm happy to report that there were many folks older than me. Older, younger, middle-aged, men, women, black, white. Very cool. My door-knocking partner was a professor of geology at University of Dayton, father of three, and life-long democrat. He was a great guy. Overall, a good day, and I slept well last night.
Posted by Launa Hall at 12:53 PM No comments: 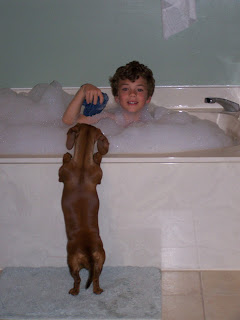 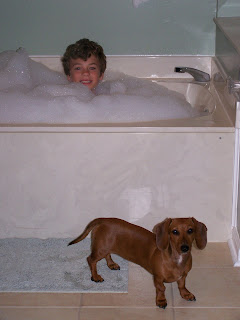 ...is a big tub that, with a promise of excessive bubbles, normally bath-phobic children dive right into. And the dog is clearly thinking about it in this photo, though I'm happy to report that she didn't actually take the plunge.

Remember how we had a puppy? Well, no longer. Lacey is now 6 months old, and officially "mature". Tomorrow she goes in to be spayed. Oh, I feel so sorry for her. I wish there was some way I could explain it to her. Bless her little canine heart.
Posted by Launa Hall at 11:38 PM No comments:

Now all we need is a yellow brick road 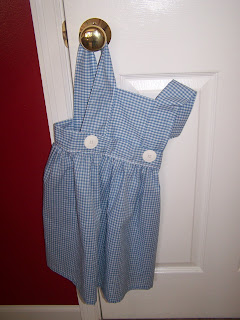 Yes, if you guessed Dorothy in the guess-the-costume post, you get an A+.

I don't think I fully appreciated how iconoclastic this costume is, until I was at the cutting counter at JoAnn's with these bolts in hand. "Oh, you're doing Dorothy!" she said. Um, yeah. A stunningly original idea, obviously. But that's okay. It was Leah's idea and she's going to have a great time, even if she's one of several Toto toting Dorothys in the school hallways.

I made a little white skirt, and this apron to wear over it with a white blouse. I'm very happy with how it turned out. More to the point, Leah loves it. I directly stole the idea of costume-as-apron from the amazingly creative Amy at http://angrychicken.typepad.com/ . So, after Halloween, she has a charming apron for hanging out in the kitchen with me. And lovely matching hair bows, should she choose to don them.

She told me she wanted to be Dorothy for Halloween about one second after I said "The End" when we read Frank L. Baum's The Wonderful Wizard of OZ this summer. She, nor Jacob, had seen the movie until this past weekend. Before seeing the movie, she was looking forward to her silver shoes. Well, of course! The shoes in the book are silver. I was all for dressing her in the silver shoes, and having her explain to everyone that she was Dorothy from the book, snob that I am. But Justin mentioned to her that most people will be expecting ruby slippers from the movie, and then we watched the movie, and that sealed the deal. Our household Dorothy will have her ruby slippers. (FYI, they changed the color to ruby in the film to take better advantage of that fancy new color technology they were showing off for the first time.)

Now you get to guess what the rest of the family is planning to be. That is, if the older child decides. Bless his heart.
Posted by Launa Hall at 11:17 PM No comments:

You may have noticed there is a lot of tension in the air. It's the election, yes. It's the economic woes broadcast 24 hours a day on the news, yes. Locally, we have a school bond going before the citizens of Beavercreek asking them to fund a new junior high school and repairs to the other desperately bad buildings. I've been stumping for this, and everyone I talk to is either for it and tense that it won't pass (this is the third try), or dead set against it and tense that I'm asking them about it. And very locally, my husband's sciatic nerve has flaired up mightily. This has never happened before, so we're finding out exactly how painful a flaired sciatic nerve can be. Answer: very. This makes my sweetie, um, tense. He's in a lot of pain. The painkillers don't seem to be working. The doctors don't seem to know exactly what is causing it. I need to research it myself, find out the homeopathic remedies. I have a funny feeling they will start with turning off the news and getting more sleep.
Posted by Launa Hall at 10:54 PM No comments:

My children's school pictures came back today, and they are killer good. I love them. The day they came home from picture day, they talked about how the photographer was giving them silly nicknames and they were all giggling. It totally shows. They both look happy and alive and....so darn old. I have a theory that the school picture camera has an uncanny ability to photograph your child just slightly in the future.
Posted by Launa Hall at 3:23 PM 2 comments:

Launa Hall
Arlington, VA, United States
I teach Pre-Kindergarten for at-risk four-year-olds at a public elementary school just outside Washington, D.C. I have a Masters in early childhood education and a Masters in creative writing, and I find the two disciplines draw upon the same artistic impulse of COMPOSITION. l write here about teaching as a creative endeavor. Thanks for visiting, and I'd love to hear from you!